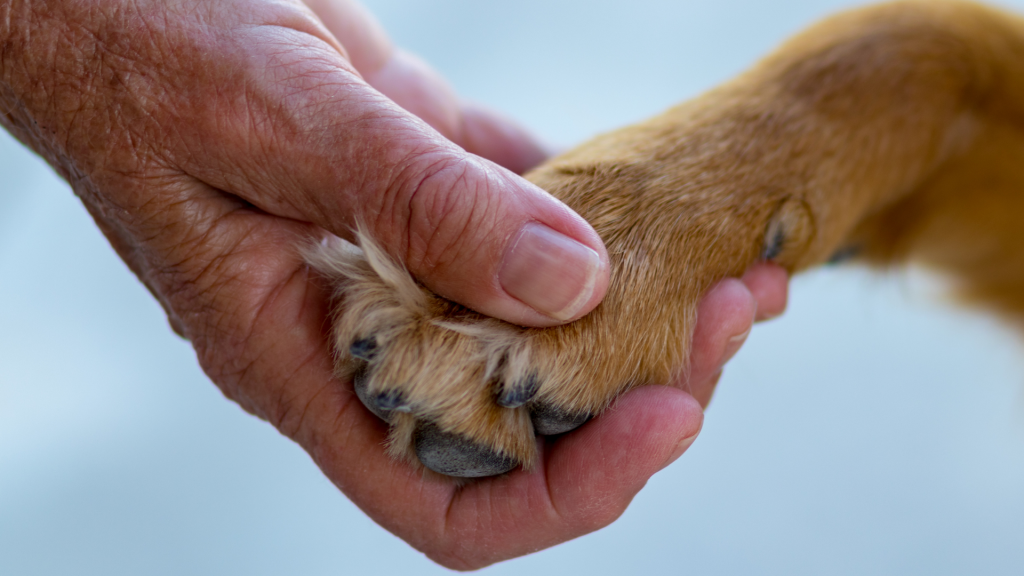 Listen to the podcast:

Symmetric lupoid onychitis/onychodystrophy (SLO) is a rare autoimmune disease of dogs. In this disease, the immune system, which usually keeps the body safe from germs and cancer cells, decides the connections between the claws and the skin should be attacked. This leads to easily damaged and ripped off claws in affected dogs. In this episode, veterinary dermatologist Dr. Brittany Lancellotti discusses why this occurs, what treatments may be recommended, and what to expect during the treatment process.

A Rare Claw Disease of Dogs

Today I want to talk about a pretty rare disease, but one that I see as a veterinary dermatologist enough that I’d like to be able to educate pet owners of dogs who do have this condition.

When I say it’s pretty rare, since I’ve been with Veterinary Skin and Ear in Los Angeles for a year and a half now, I can count on one hand the number of symmetric lupoid onychitis cases I’ve had (which is the disease I’ll want to share with you today). In comparison, I can count on two hands the number of allergy cases I see in one day! 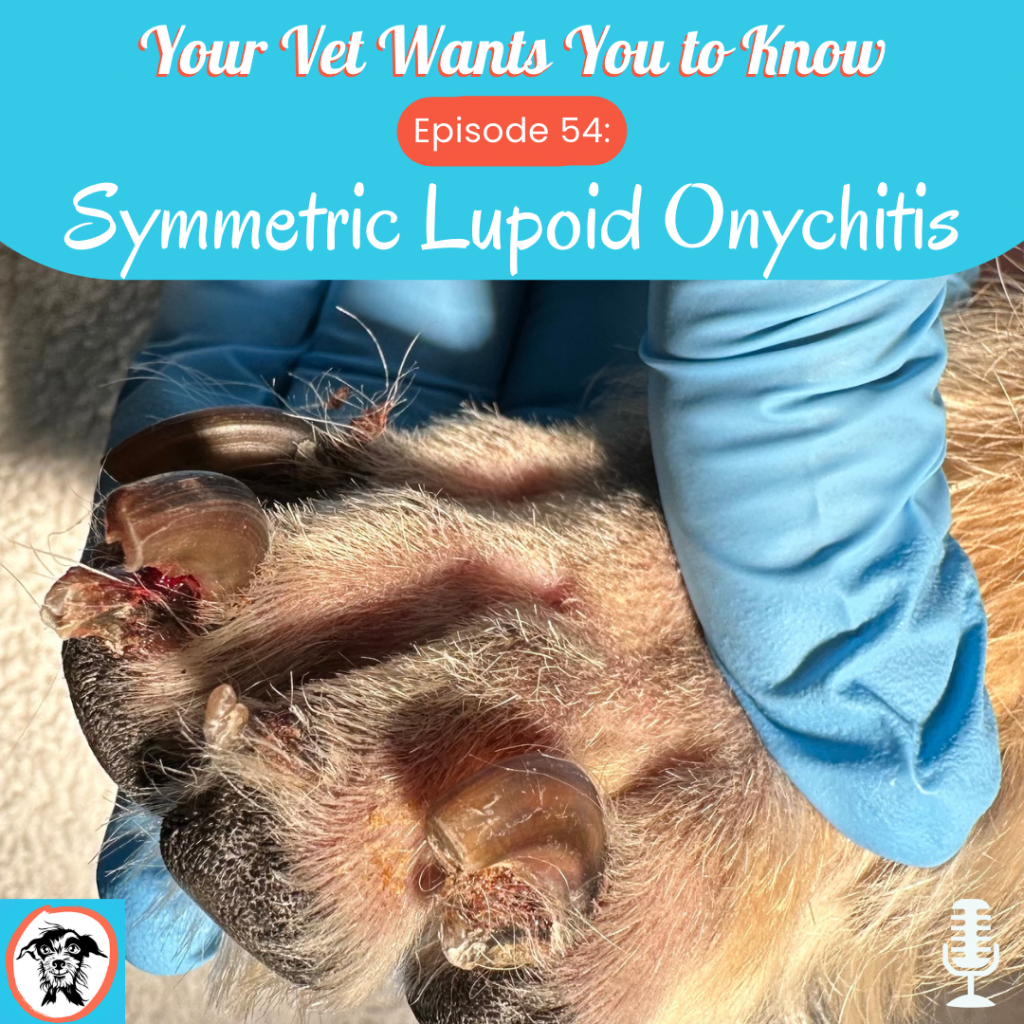 Why does my dog keep tearing off its claws?

It was really cool to see the stark difference between the two cases because Olive, who I’ve been helping since she was diagnosed around 6 months ago, was in just as bad shape as Skyleigh, my new patient. Olive is completely in remission, but it was a journey to get here.

Olive’s owners started noticing Olive lick her paws more than usual, and even though she is a young, energetic Australian Cattle Dog, she damaged more than one claw while running around within the space of 2 weeks. At that point they started to think something wasn’t right, and they headed right in to see me.

By the time I saw Olive, six of her claws had some degree of disease and all of them were painful. That’s the most heartbreaking thing about this disease is how uncomfortable these animals are. Despite how much she hurt, my behavior assessment for Olive, which I try to remark on for each one of the dogs I see, always included the comment, “very sweet girl.”

I talked to Olive’s owner about SLO, which is an auto-immune disease. The immune system, which we want to protect the body by attacking things like infectious organisms or cancer cells, decides instead that normal parts of the body need to be attacked. In SLO, this auto-immune disease attacks the claws.

There can be certain triggers for that auto-immune attack to begin. Things like infectious diseases, most commonly from ticks, vaccines, and even specific proteins in foods can be rare triggers.

Olive’s owner and I went through her history and she had been vaccinated for a few common infectious diseases here in Los Angeles. She had never had a vaccine reaction before and the things she was being vaccinated for were common for her to be exposed to as a young city dog. Moving forward, Olive’s family and their family vet have discussion of the risk benefit ratio for vaccinating her against certain diseases based on her extremely rare situation, given that the overwhelming majority of vaccinations have no reactions whatsoever and are extremely helpful in preventing spread of infectious disease.

During Olive’s first visit with me, a few of her claws were so badly damaged that she needed to be sedated and given pain medication for me to remove them comfortably. That way healthy claw could grow in once we started treatment to get her immune system back on track.

Because Olive’s claws had several different stages of disease, I warned her owner there was the possibility we may need to sedate and remove claws more than once, especially during the early stages of the disease when we are trying to get the immune system into remission. Sure enough, about 3 weeks later, the rest of the claws that had been damaged but hadn’t quite separated away from the toe when I first saw her were bad enough that they needed to come off too.

Between the claws she lost before Olive came to see me and the claws we removed with the help of sedation and pain medication, there was a total of 15 severely diseased claws that came off.

In this video, lidocaine, a local anesthetic, is injected around the toe to numb the area and provide pain relief during removal of the diseased claw.

In this video, after numbing the toe with lidocaine, the diseased claw is easily removed at the base. This is performed under sedation so the pet is not painful. Healthy claw regrows if medications are used to suppress the autoimmune disease.

What treatments are used for this autoimmune claw disease?

Typically vets will reach for a combination of treatments that relieve pain, decrease swelling, suppress the immune system, and get rid of secondary infection.

There is a wide range of treatments, some that can be used by themselves, some that need to be used in combination with others. Every animal with this disease is different and, of the patients that I’ve treated over the years, no two have responded to exactly the same drug combination. This is where I remind you to have a relationship with a veterinarian so you can discuss what drug or drugs are right for your pet. Telling your veterinarian every medication your dog is taking is important to minimize risks of complications from interactions.

One supplement found to be particularly helpful in allowing me to decrease the dose of other prescription medications used when treating SLO is Omega-3 fatty acids. There are a lot of different brands of Omega-3s, so again, it’s best to ask your vet their preference.

We had to make some adjustments to Olive’s medications along the way, but since she has been in remission and we are working on decreasing her medications, she has not lost any additional claws. The claws she did lose have grown back in so stinking beautiful. I really do love how great Olive responded to treatment. She’s a joy to see for visits, but she’s doing so well, I get to see her less and less frequently. Her next visit with me will actually be around the the one year anniversary of when she started having signs, so make sure you hit subscribe and I’ll be sure to give you folks an Olive update in a few months.

This segment is designed to highlight something (a product, human interest story, website, etc) that provides relief or just makes you feel good. Hence, scratching the itch!

Today’s scratching the itch is the Comedy Wildlife Photography Awards. Since 2015, each year this organization has held a global competition that’s able to make a meaningful contribution to the amazing world of wildlife.

This organization aims to widen understanding and engagement of a sustainable world – and wildlife conservation specifically – for the preservation of biodiversity and the health and enrichment of everyone on Earth. They do that through connection with animals and humor, two of life’s greatest gifts.

Each year they choose a small grass-roots conservation organisation to support. Check out this year’s winners whenever you’d like to laugh or admire some amazing wildlife photography. 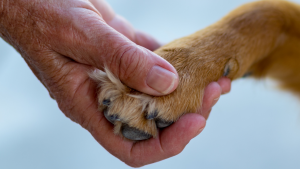 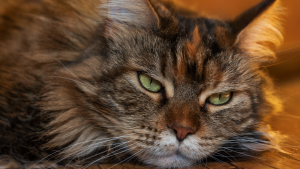 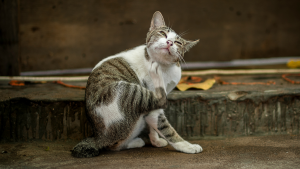